What is Uterine Fibroid Embolization?

Uterine Fibroid Embolization (UFE) is a minimally invasive procedure used to treat benign fibroid growths in the wall of the uterus. Our UFE is considered an effective non-surgical alternative to hysterectomy or other more invasive treatments.

Uterine Artery Embolization (commonly called Uterine Fibroid Embolization or UFE) is a minimally-invasive procedure used to treat benign (non-cancerous) fibroid growths that develop in the wall of the uterus. Fibroids are not cancerous tumors per se, but can cause severe symptoms in some women, including heavy menstrual bleeding, swelling of the abdomen, and pelvic pain. UFE is a procedure in which the arteries that feed these fibroids and allow them to grow are embolized, meaning that blood flow to them is blocked so that the tumors are deprived of nourishment and thus shrink. When the fibroids shrink, the symptoms improve.

There are a few different types of fibroids, learn more.

Interventional radiologists perform this procedure by introducing a tiny catheter through a nick in the skin in your groin into the femoral artery, or more commonly through a nick in the skin in the radial artery in the wrist. The catheter is guided using fluoroscopy into both of the uterine arteries, and then a contrast fluid is injected to help the doctors locate the fibroid growths to be embolized. Finally a number of tiny embolizing particles are injected, which surround the fibroid and block blood flow to it.

For many women they do not cause severe symptoms, but when they do, Uterine Artery Embolization is considered an effective non-surgical alternative to hysterectomy or other more radical treatments. 85 to 90% of women who undergo this procedure report significant reduction of symptoms.

85 to 90% of women who undergo this procedure report significant reduction of symptoms.

Connect with the professionals at MTV IR to get a consultation and get back to living your life.

If your doctors decide that you are a candidate for this procedure, it will be performed by MTV IR interventional radiologists.

Medical staff will insert IVs and other monitors to measure your vital signs. After a numbing medication is injected into the area, the interventional radiologist will insert the catheter into the large artery and guide it into place in the uterine arteries using X-rays. Depending on your preference, you may either be moderately sedated or given general anesthesia. The procedure takes less than an hour.

Performed by and MTV IR interventional radiologist, and takes less than an hour

Afterwards, the catheter is removed and the doctors will monitor your progress. After your release, you should avoid driving for 24 hours, limit your activities, and avoid physical exertion or heavy lifting for several days. Full recovery usually takes 7 to 10 days.

MTVIR is a team of experienced interventional radiologists who consult with other doctors to bring state-of-the-art radiology treatment to their patients.

A Few Of Our Cases 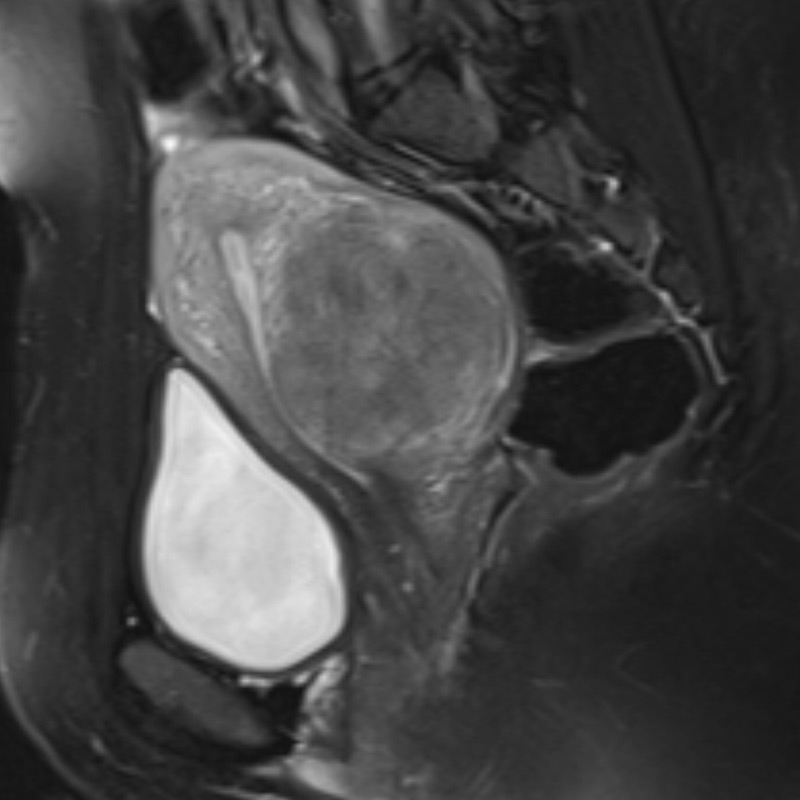 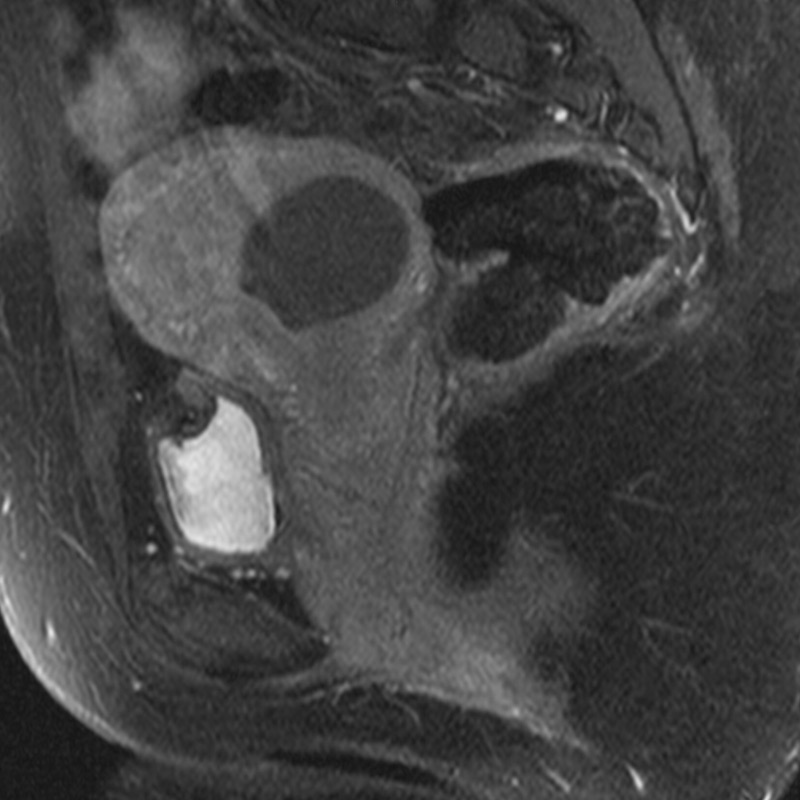 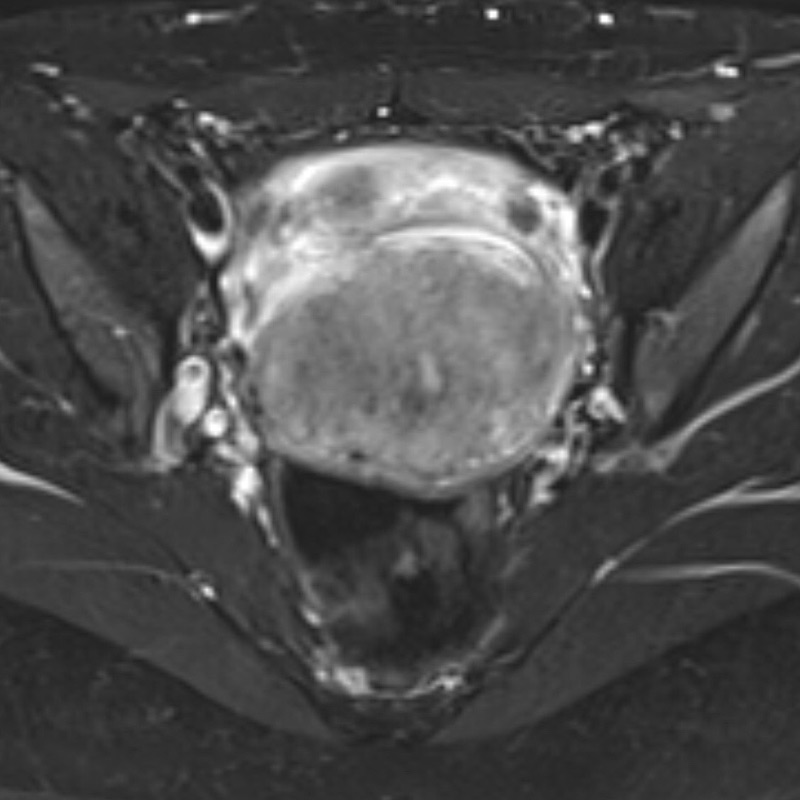 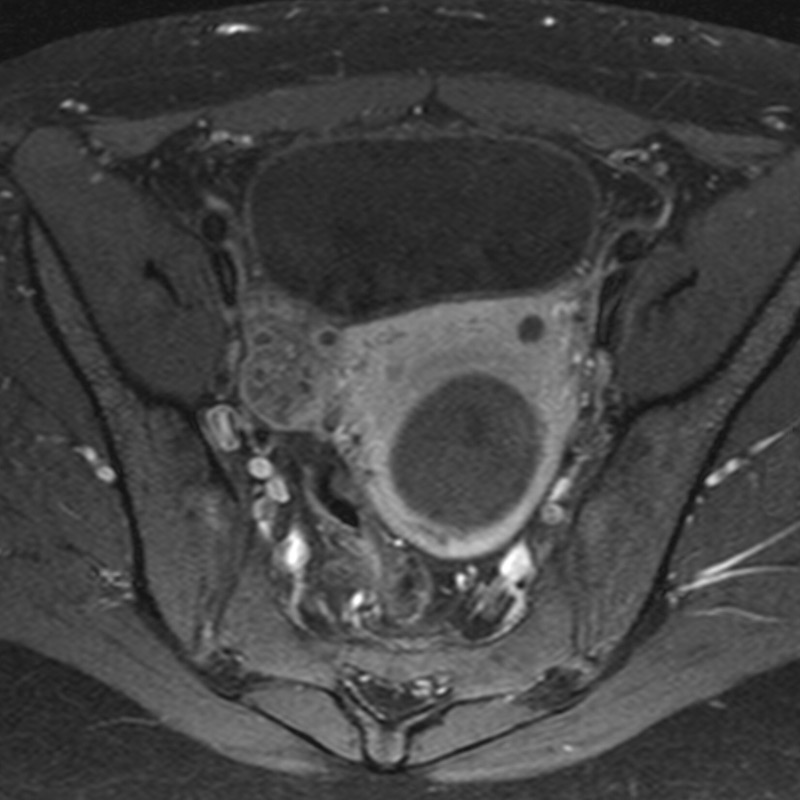 This is an image of an MRI of the pelvis that demonstrates a large uterine fibroid. The images were obtained from the side or lateral projection. The fibroid is the round structure in the center of the image.

This is the same uterine fibroid but taken on a horizontal plane. The fibroid is seen enhancing after the administration of a dye.

Here we see the fibroid 4 months after the uterine fibroid embolization procedure. This image was also taken in the lateral projection and after the administration of contrasting dye. In this picture, the fibroid does not enhance and is now smaller than seen before.

This image shows the fibroid after the dye and shows the surrounding uterus enhancing normally but the fibroid isn't enhancing, indicating a good effective treatment. The patient's symptoms of bleeding has resolved and the fibroid is also smaller than the pre-procedure image.

This is an image from the same MRI but the the picture was taken on a horizontal plane. The image again shows the large central uterine fibroid. 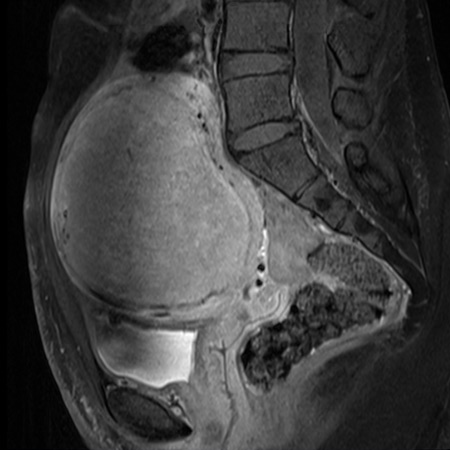 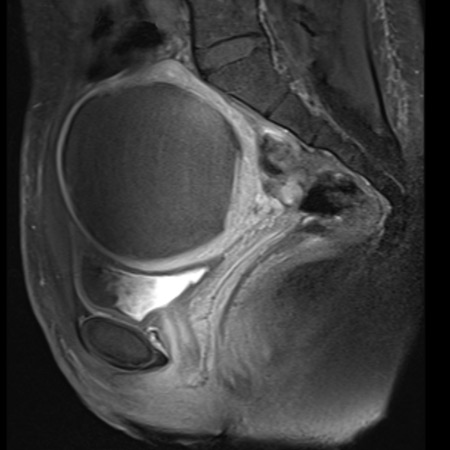 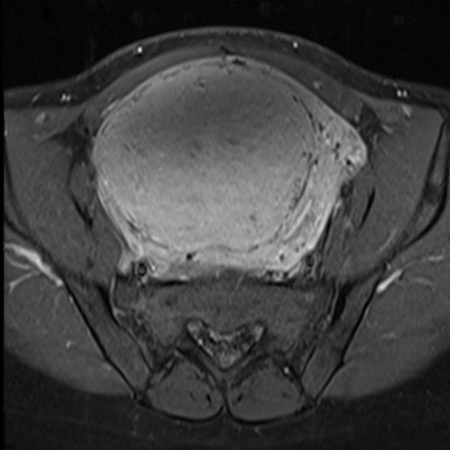 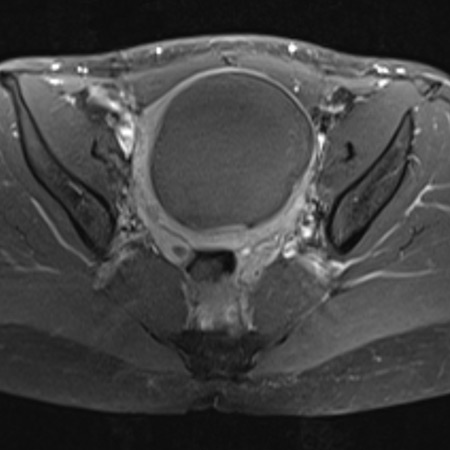 This is an image of an MRI of the pelvis that demonstrates a large uterine fibroid. The images were obtained from the side or lateral projection. The fibroid is the round structure in the center of the image.

This is the same uterine fibroid but taken on a horizontal plane. The fibroid is seen enhancing after the administration of a dye.

Now we see the same patients 8 months later, after the uterine fibroid embolization procedure has taken place. This image is taken in the same direction as Image A. The uterine fibroid now looks much different. The fibroid is dark and does not enhance after the administration of the MRI contrast agent. When you compare to Image A, the fibroid is much smaller in size and is displaying 100% blood flow blockage.

This is another horizontal image from the same MRI as shown in Image C.  The uterine fibroid again shows that it does not enhance and has decreased in size. The patient has found relief from their bleeding symptoms and the pressure on the urinary bladder has improved. Based on the size measurements, the fibroid has decreased by 36% and it will continue to shrink over time.